Ever thought of getting married in a national park? With scenic vistas of the Atlantic Ocean, San Juan National Historic Site in Puerto Rico is a beautiful spot to host an event. And with over 500 years of history and iconic masonry walls, it’s no surprise that photographers, event planners, and film productions are keen to make the most of the park. That’s where the park’s Special Permits Coordinator Angel Cuevas comes in. Working with visitors, organizers, producers, and others, Cuevas ensures that those seeking to capture the park’s unique history and beauty obtain the necessary permits to do so. It’s a job that requires a fair amount of quick-thinking, and for Cuevas, that’s part of the appeal: “my favorite part of my job is that I never have a routine. I always have different things to do.”

The park attracts visitors from all over the world, including a familiar figure Cuevas happened to run into one day while working.  Noticing a man dressed in green and red, with some particularly Christmas-like designs, Cuevas realized Santa was making an off-season visit to the park. “When I saw him, I said, ‘Santa, it’s been so long! Could I take a picture with you?’ Santa replied that it would be an honor to be photographed with a Park Ranger. The children were surprised when I told them that indeed it was Santa and that he was good with me. All the parents told the children that if they behave well, the same thing could happen to them.”

While there is much to admire in the park’s place in history as well as its recreational opportunities, for Cuevas, it is what lies underneath that claims his favorite spot in the park – the tunnels of the Castillo de San Cristobal. “These tunnels have many functions, one of them (and the most obvious) is to get from one side of the castle to the other. But these tunnels were also made so soldiers would be able to fire muskets without being wounded if the Castillo was under attack. They have holes soldiers could shoot out of without being injured themselves.” 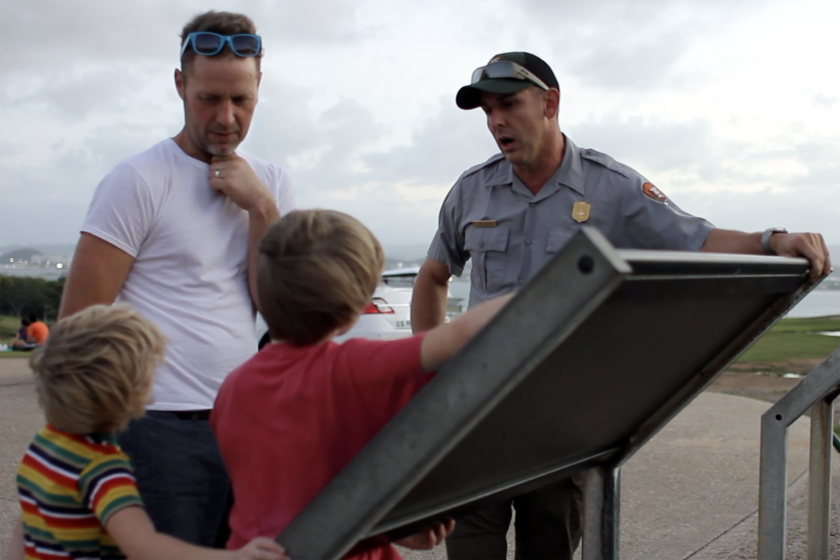 Cuevas has been with the National Park Service for over seven years, having started as a Park Guide and later becoming a Visitor Service Assistant at San Juan National Historic Site. A lover of travel, outdoors activities like camping and hiking, and learning new stories, Cuevas was naturally drawn to work with the National Park Service and enjoys tackling all the challenges that his job may pose. “It helps me develop my skills, exposes my work, and builds up my strength in order to continue working for our visitors and for everyone who benefits from our park.”

The “National Park Ambassadors” video series is produced by the National Park Foundation and its Find Your Park premier partners Budweiser, HanesBrands, L.L.Bean, Nature Valley, Subaru of America and Union Pacific Railroad, with additional support from The Coca-Cola Company and Winnebago Industries.